Mental pictures: applying joy and colour to a challenging issue

This blog has been written by Melanie Andrews, Design Network Manager, RSA. It has also been posted on the RSA website.

A recent exhibition at the Wellcome Collection, ‘Can Graphic Design Save Your Life?’ explored how communication design could be persuasive, shocking and perhaps even instrumental in healing. Last week, to coincide with Children’s Mental Health Week, the RSA Academies launched an exciting new project with a related theme.

‘Mental Pictures’, has been created in partnership with the Helen Storey Foundation and RSA Design Network to explore how students and teachers can use creative approaches to mental health issues in schools.  As reported by mental health charities and schools this is an increasingly relevant and critical subject, which can often prevent students from flourishing and reaching their potential. The project aims to tackle issues openly and creatively and to naturalise discussions and work around mental health and wellbeing.

Mental Pictures complements another mental health initiative that the RSA Academies has been running concurrently for teachers with the RSA Action and Research Centre, funded by the Pears Foundation. A ‘Comprehensive Approach to Mental Health in Schools’ provides mental health awareness training to over 500 adults that come into contact with children across the Family of RSA Academies.

Five schools are participating in Mental Pictures; Arrow Vale, Church Hill and Ipsley in Redditch, Holyhead in Birmingham, and Whitley in Coventry. Each school will produce a student-centred response to an open brief and piece of work to raise awareness in their communities. This could be an ad campaign, a performance, a mural or art work.

One of the UK’s leading communication designers, Morag Myerscough RDI participated in the project launch session on 8 February hosted by RSA Academy Arrow Vale.  Morag was appointed as one of the RSA’s Royal Designers for Industry in 2017 and recently named as one of the most influential female designers of the last century. Dressed in vibrant colours and dazzling op-art patterns, Morag gave an inspiring talk about her creative life and work.

Using colour as a key form of expression to evoke emotion and mood, Morag shared how her projects in the public realm were conceived and developed. The images she showed were colourful graphic works and installations which were immersive, interactive and had a positive effect on people and their communities. Each example included a process of rigorous research, community consultation and collaboration which had transformed the public spaces and places Morag had worked in; from hospitals and schools, to squares and community centres.

David Frost, an outreach volunteer of the Samaritans, provided the context and background on the links between emotional and physical health and wellbeing. David spoke sensitively about the charity’s work and how its volunteers supported people of all ages and backgrounds. He emphasised the importance of children and young people feeling able to talk with others they could trust about any problems or issues they were facing. The most common of these were anxiety, cyber bullying, eating disorders and self-harming which teachers have reported are on the rise.

Searching questions for Morag and David were stuck on flip-charts by groups of students from three schools which helped to kick-start ideas in the break-out groups.

By the end of the session the students were revealing some diverse ideas for their projects; an art garden to promote wellbeing, a network of trusted pupils to discuss your problems with, and a piñata, which, when hit released helpful information about mental health. 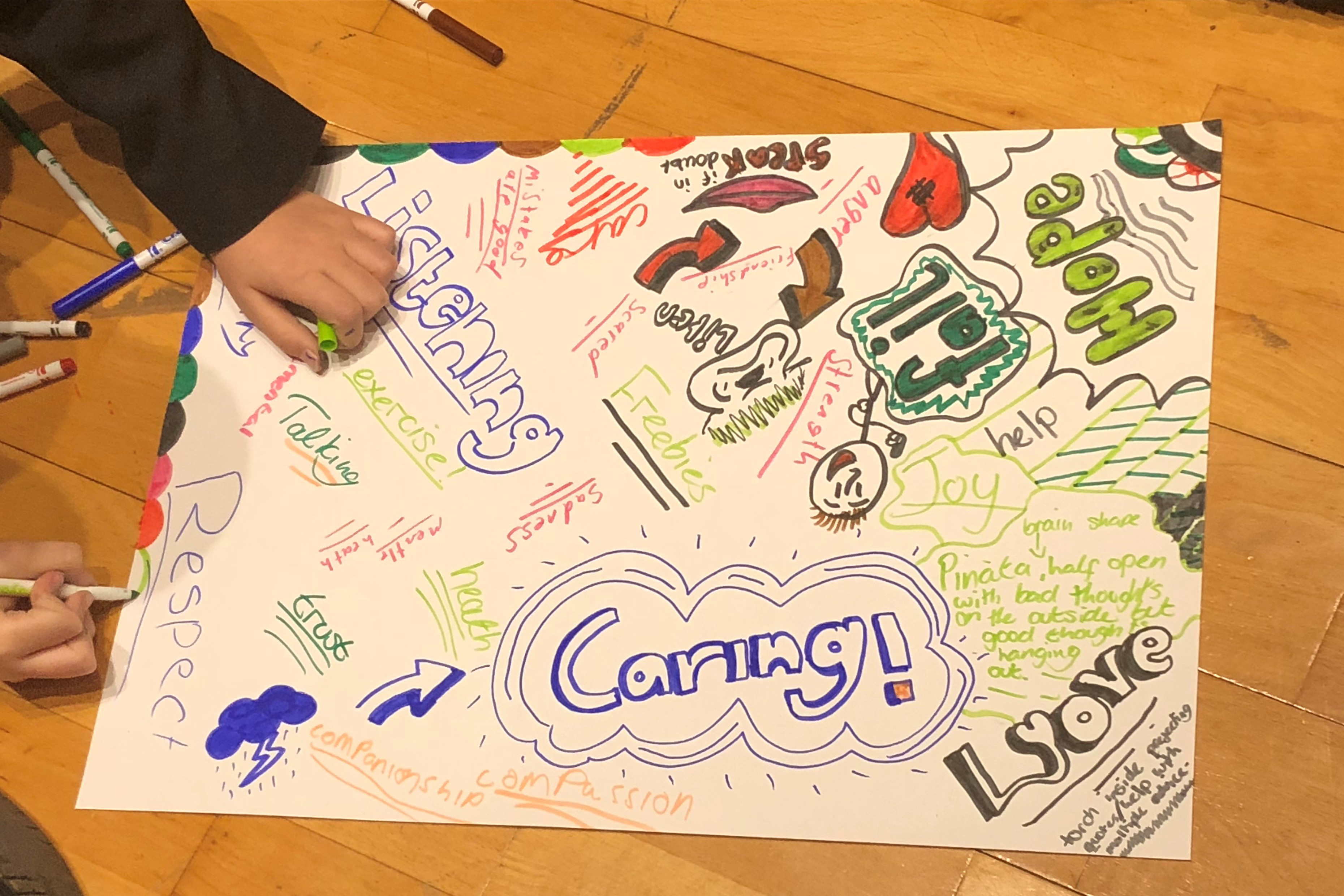 “Talk, listen and care” was a working title for this ‘mind map’ by Ipsley CE RSA Academy

Exposure to designers whose creativity has positively impacted the world around them can make a powerful connection for pupils. Tackling a difficult subject through creative practice and collaboration can create a lasting inspiration for pupils and teachers alike. The RSA’s design network of Royal Designers for Industry and RSA Student Design Awards Alumni are proving to be an invaluable resource in providing this creative stimulus.

The presentations and ideation sessions have already demonstrated how creative approaches to difficult issues can help to solve problems and overcome many mental health issues.

Over the Spring term each participating school in Mental Pictures will create a collaborative piece of work that benefits their whole school. In July we will be inviting them to share their work and its impact at the RSA Academies’ Festival of Arts and Creativity. 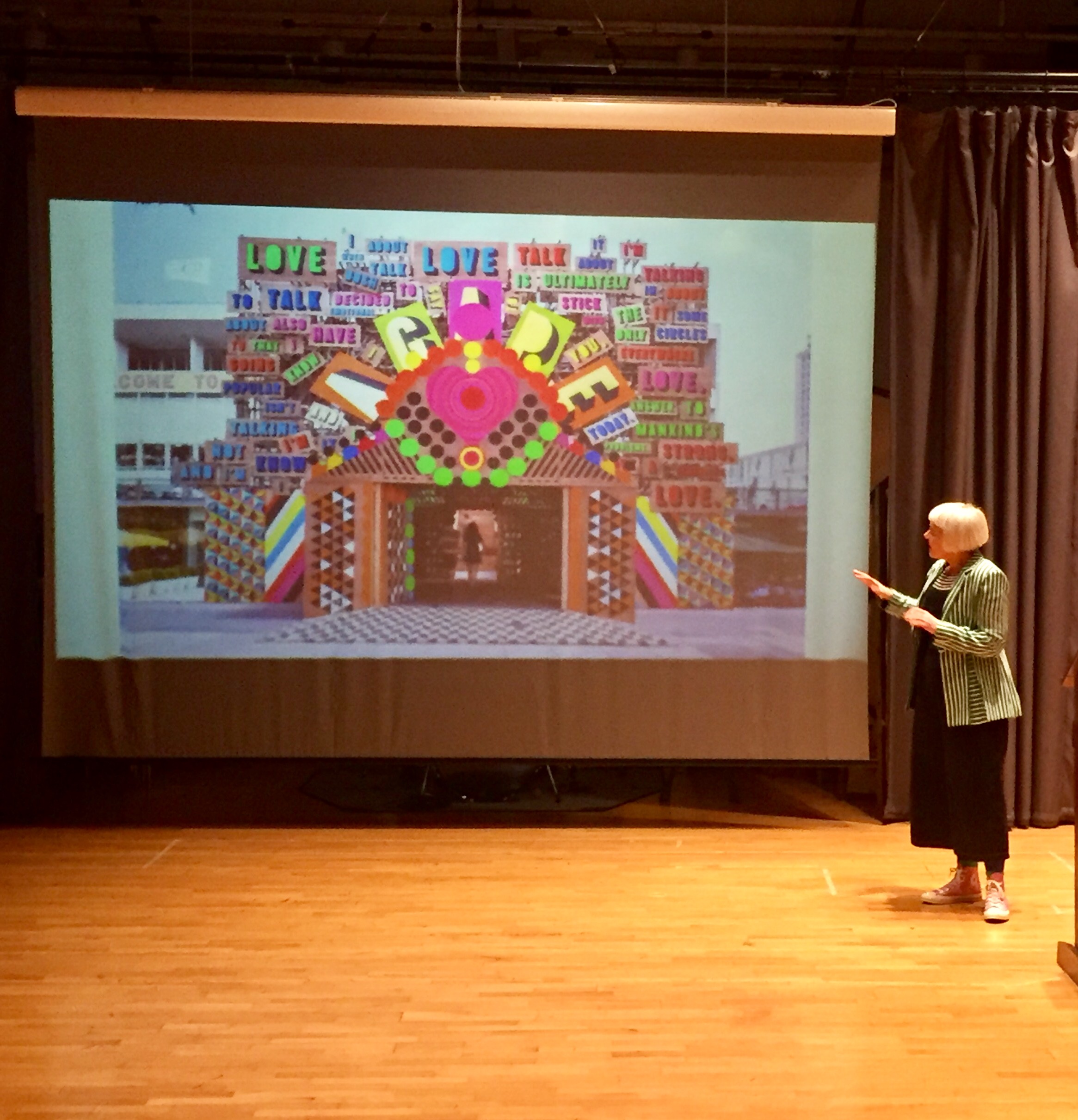 “If your places and spaces feel positive, you can feel better too”